Towards the close of the Second World War, Bournemouth Council set up a small committee to initiate a scheme to provide homes for disabled ex-Service people and their dependents.  This was instead of the usual erection of a memorial with the names of those who had sacrificed their lives for freedom as it was felt that they would have wished that their comrades who had returned, although sadly impaired, were given homes where they and their families could pick up the threads of their lives in comfort and security.

There were two essential requirements before theory could become reality: money and land.

Fortune smiled so far as a suitable site was concerned.  In Bournemouth, one of the largest landowners and outstanding benefactors had been the Cooper Dean family, and it was to them that the appeal was made, and not in vain, for nearly six acres of land on the Longbarrrow Estate was given by Ellen Anne and Alice Elizabeth Cooper Dean and their two nieces, Alice Ellen and Edith Bethia Cooper Dean.

The land was on the north side of Castle Lane West which at the time was pasture, stretching out to the ancient village of Holdenhurst.

Money was obtained by mounting an appeal to enable the scheme to come into fruition and prominent local businessman and magistrate Bertram George Haycock took on this task.  IT was thanks to him that £80000 was raised and the final sum yielded £100000.

As the money started to come in the Committee entrusted the architectural work to John Burton, the Borough Architect to the Bournemouth Corporation.

On the 28th October 1946 the foundation stone was laid by Admiral the Viscount Mountbatten of Burma, GCVO, KCB, ADC, LL.D, DCL. 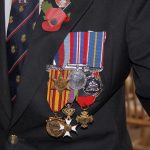 In 1947 the council arranged for the creation of the Trust Deed, which governed the running and control of the future Bournemouth War Memorial Homes which were duly registered as an official charity.

The first homes to be built were those facing onto Castle Lane West and these were completed and occupied in 1948.  Shortly after twenty two more homes were built at the rear on the south side of Jewell Road and these were all completed a year later.

Although we are still home to many Veterans and their dependents from the Second World War, the Homes continue to provide a valuable service to Veterans of all ages whatever their need.

Today, the Homes boasts 51 properties on a single site with a modest expansion due soon.  Although conceived in markedly different times, the Homes remains very relevant to the current age and to the future of our Veterans.